On This Terrestrial Ball > History > Paul Revere, Longfellow, and the Message of Unity

Paul Revere, Longfellow, and the Message of Unity 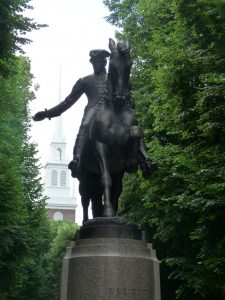 “Listen, my children, and you shall hear
Of the midnight ride of Paul Revere,
On the eighteenth of April, in Seventy-Five:
Hardly a man is now alive
Who remembers that famous day and year.”

Last month, I enjoyed Independence Day in my new home of Boston. As a major instigator in the American Revolution and a city rich in history, the events were spectacular. In fact, here, one day is not enough to rejoice in our independence from Great Britain. Boston takes a whole week to celebrate the founding of our country and the ideals of our founders with various activities. On the Fourth, Boston’s mayor read the Declaration of Independence from the Old State House – a tradition that has been uninterrupted since 1776. Amidst the festivities, I took the opportunity to explore everything the city has to offer.

Traveling along the Freedom Trail, a self-guided tour that hits all the major historical sites which played a part in the American Revolution, is always a pleasure. It is the reason I have always wanted to visit Boston. However, I never wanted to live here because the city’s liberal reputation is in direct contrast to the ideals they claim to honor. So, why did I escape one liberal state only to end up in another? The easy answer is that there are more opportunities in Boston, and living here for awhile gives me a better chance at eventually moving to liberty friendly New Hampshire. Yet, I cannot deny there is something deeper pulling me to this place.

Bostonians enjoy teaching history by dressing up and acting like historical figures, and on Independence Day weekend, I ran into someone representing Henry Wadsworth Longfellow, the poet who authored “Paul Revere’s Ride,” which introduced this significant patriot, who previously had only been known in Boston, to the entire nation. This was not his goal, however. Longfellow published the poem right before the Civil War amid our country’s greatest controversy. He was a norther abolitionist, and some historians believe he wrote the poem to condemn slavery. Whether or not this is true, the actor in Boston revealed deeper motives.

First and foremost, Longfellow was a pacifist. He feared a civil war and wanted to prevent the bloodshed that unfortunately did occur. He wrote his poem, not to extol the virtues of his side – the North – but to ignite in the hearts of all Americans, Northern and Southern, the flame of liberty that propelled us through the American Revolution and birthed a nation. He told the story of Paul Revere to remind both sides that they had more in common than what separated them. Even with the morally significant issue of slavery, Northerners and Southerners both still believed in the ideals present at the founding of the country, albeit imperfectly. Even throughout the war, Longfellow did not lose faith in the American people. Even when the country was falling apart, he believed unity was possible.

The Bostonian actor portraying Longfellow rightly extolled the virtues of telling stories – whether through poems, songs, or novels. He encouraged all of us listening to continue telling the stories of the patriots who made everything we have possible. He somberly said he hoped we never again are in a situation where we are as divided as we were on the eve of the Civil War, but if that time were to come, we must remember our common heritage and never give up on each other. And maybe a story would be enough to remind us why it is better that we remain united. A story like that of Paul Revere that shows how one person can play a vital role in changing the course of history.

I fear the actor’s warning rung too true to those of us listening. Many Americans today believe we are on the brink of a second civil war. There are those on both sides of the aisle who believe secession is the answer. Political extremism is everywhere, and the media only encourages deep divisions. Politics affects the way we act around one another in daily life. Once we know someone is on the other political side, we no longer trust each other. We appear to be as different as we were in 1860 (although the divisions go beyond North and South). Would it be better for us to split? Is America headed for a great divorce?

I spent four years in Texas, and back then, I would have been happy if the state seceded. But I can no longer advocate any split as the next best solution. Like a real divorce, this is something that should be an absolute last resort after every attempt at reconciliation has been made. We are far from that point. We have not even tried to understand each other. Any competent marriage counselor would advise we start by learning how to communicate.

Studies have shown that, across the board, Americans still share the same values. We are all generally good people who want good things for ourselves, our families, and our country. We simply disagree about how to get there. We need to stop assuming the worst of each other and instead work together to find the best solutions. I know it will not be easy, but nothing ever worth attaining did not come without hard work. And It starts with you and me. Politics will not solve our problems. Each individual needs to make the commitment to retain judgment and offer the hand of friendship to those who seem the most different.

If Longfellow had faith in Americans during the Civil War, then I certainly have faith in Americans today. Next time, I will explain why I see hope in Boston in particular, but for now I will leave you with this: When I look at liberal Bostonians celebrating the American Revolution and waving the flag, I do not see hypocrites. I see patriots who believe in freedom as I do. I see Americans I can reach out to and share my ideas with while I listen to theirs. They may misunderstand liberty as meaning positive rights instead of negative, but at least they are talking about rights. They may misunderstand Samuel Adams and Benjamin Franklin, but at least they still revere them.

This is no time to give up on each other. There is still common ground and room for discussion. Until the day liberals outright reject our country’s principles, there is still hope and a future worth fighting for. Like Longfellow, I believe we are far better off as the United States of America. Just listen to the story of Paul Revere:

“So through the night rode Paul Revere;
And so through the night went his cry of alarm
To every Middlesex village and farm,–
A cry of defiance, and not of fear,
A voice in the darkness, a knock at the door,
And a word that shall echo forevermore!
For, borne on the night-wind of the Past,
Through all our history, to the last,
In the hour of darkness and peril and need,
The people will waken and listen to hear
The hurrying hoof-beats of that steed,
And the midnight message of Paul Revere.”

© 2018 Dani MacInnes & On This Terrestrial Ball. All rights reserved. This material may not be re-published, re-broadcast, re-written or re-distributed without permission from the author of this piece.