On This Terrestrial Ball > Disasters > The Forgotten Victims of the ‘Titanic’

The Forgotten Victims of the ‘Titanic’ 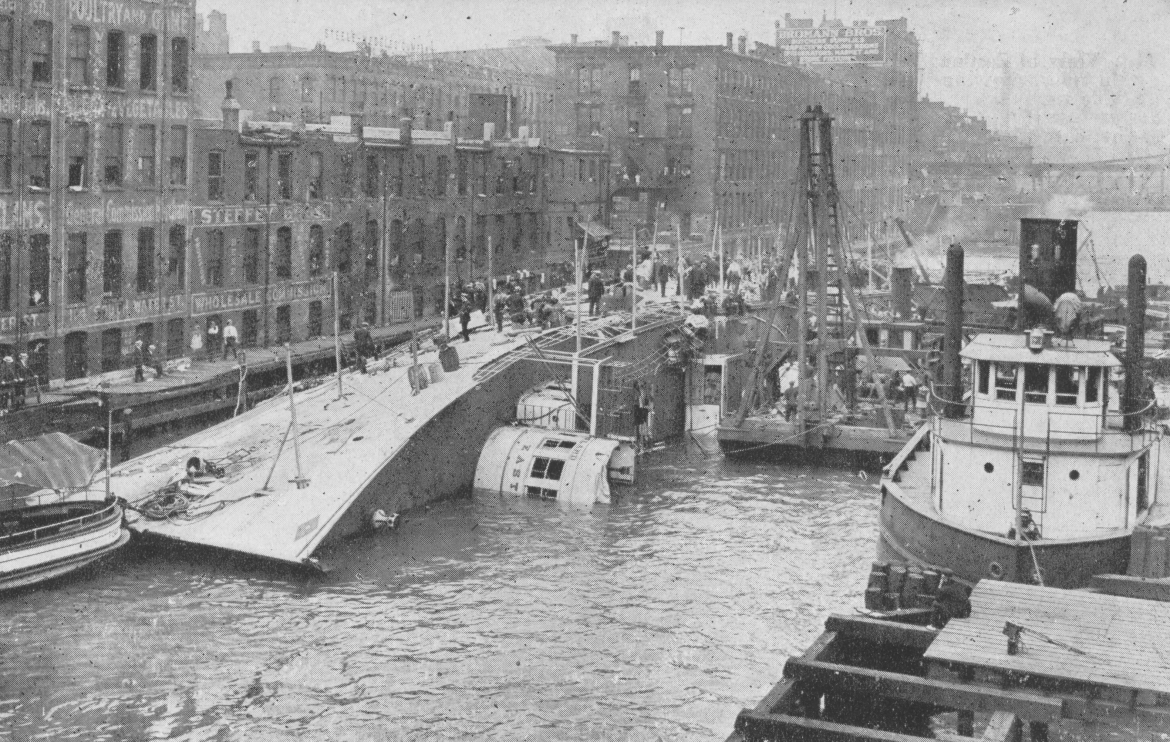 On the Twenty-Fourth of July 2021, a little-known anniversary will pass under the radar of most Americans. It is the anniversary of a tragedy that unfolded in the Great Lakes port of Chicago a little over a hundred years ago, in which over eight hundred people perished.

How the response to the ‘Titanic’ disaster led to another great shipwreck disaster, this time on the Great Lakes

On the Twenty-Fourth of July 2021, a little-known anniversary will pass under the radar of most Americans. It is the anniversary of a tragedy that unfolded in the Great Lakes port of Chicago a little over a hundred years ago, in which over eight hundred people perished. Today, the few who know the story remember it as the largest loss of life ever to take place on North America’s Great Lakes. Perhaps this tragedy is seldom remembered or mentioned today because of who the ultimate culprit was, and how their bungling intervention caused an easily avoidable disaster. Nevertheless, it is because of this culprit, and the connection to another famous tragedy, that this story ought to be told and remembered.

On a warm Saturday morning in July 1915, the Western Electric company of Chicago took their workers on a company-sponsored holiday in gratitude for all their hard work. As part of the holiday event, the workers and their families would be transported by steamship from Chicago to a picnic area in Michigan City, Indiana, where the main picnic would occur. To accomplish this, Western Electric had hired five steamers to transport these thousands of souls, the Rochester, Racine, Petoskey, Theodore Roosevelt, and Eastland. All were brought into Chicago to board their passengers.

At 6:30 AM, the passengers began to board one of the steamers, the Eastland, tied up at a wharf on the Chicago River between Clark and LaSalle Streets. Gradually the ship filled with passengers until she was carrying a little over 2500 people. Then the real problems began. The ship began to sway back and forth in an unsteady fashion. The crew tried flooding the ballast tanks in the ship’s lower hull to try and stabilize their vessel, but their efforts were to no avail. At around 7:30 AM, just a little under an hour since the passengers had begun boarding, the Eastland suddenly lurched to port, rolled on her side, and sank in the Chicago River’s shallow waters. Rescuers swarmed to the scene to save the passengers, many of whom were women and very young children. Despite their efforts, some 848 of the 2500 souls aboard perished, either drowned in the river or trapped in the Eastland’s overturned hull.

In the immediate aftermath of the tragedy, public ire rose against the Eastland’s captain and crew, especially in light of some actions of theirs during the rescue operations later deemed to be the result of poor judgment. Later investigations would determine that the cause of the disaster was the ship being too top-heavy with so much weight from passengers and equipment on the ship’s upper decks. As a result, no actual negligence or culpability could attach to the captain or the crew, and the courts cleared them of all accusations of wrongdoing.

However, this did not resolve all the questions which arose as a result of this disaster. The Eastland had been a reliable Great Lakes steamer for twelve years and was designed for just such large passenger loads; even loads comparable to the one she took on that Saturday morning in 1915. Why should she suddenly go all top-heavy and capsize? Especially on a calm river tied up at a wharf? There were too many questions and not enough answers.

It was not until the publication of a monumental work on the tragedy eighty years later that suddenly much began to become clear. In 1995, historian George W. Hilton published a book called “Eastland: Legacy of the Titanic,” wherein he seemed to finally stumble upon answers to the mysteries surrounding the Eastland tragedy. In this book, Hilton made a connection between the Eastland’s problems that July morning and a federal law called ‘The Seamen’s Act.’

The Seamen’s Act was introduced into Congress by the Progressive heavyweight Senator Robert M. LaFollette of Wisconsin in the wake of negotiations between America and Britain over the rights of sailors and safety concerns in the wake of the RMS Titanic disaster of April 1912. The act contained many basic progressive platforms that allowed extensive government intervention into labor and contract practices between ship owners and employees. One of the provisions in the act, though, was a direct response to the Titanic tragedy. It was a mandate which required that all ships, especially passenger ships, carry enough lifeboats for all individuals on board. At face value, the mandate was understandable; one reason for the Titanic’s high death toll was a lack of lifeboats. However, the mandate failed to recognize the unique needs of different sizes of ships, and instead applied a ‘one-size-fits-all’ solution to all ships under American jurisdiction.

With support from seamen labor unions, and using sympathetic visual imagery stunts to manipulate the emotions of President Woodrow Wilson and members of his administration, La Follette successfully got the Seamen’s Act passed and signed into law. It took effect on March 4, 1915, just five months before the tragedy. It was this act which ultimately sealed the Eastland’s fate.

Designed for speed, the Eastland was a slimmer ship, not meant for heavy cargoes on the upper decks. The Seamen’s Act now required that she had to carry enough lifeboats for the number of passengers she could theoretically hold. With her potential capacity sitting at around 2,500, this mandated that she had to carry far more lifeboats than before.

The increased number of lifeboats on the upper decks had the horrible side-effect of making the Eastland very unstable, a point noted by several in the weeks leading up to the disaster. The fact that the disaster did not happen sooner is likely because, until that July morning, Eastland had been transporting far fewer passengers than her capacity allowed. While the smaller numbers of passengers had reduced the potential for tragedy, the steamship company that owned her was fast losing money with every run she made under capacity. In order to remain profitable, the owners needed runs at or close to full capacity. Backed into a corner, the owners allowed Western Electric to charter the Eastland in late July as they hoped it would result in recouping some of the financial losses they had been sustaining for most of the year.

In light of this information, the mysteries surrounding the Eastland tragedy are now mainly answered. With her decks overloaded with lifeboats, Eastland could not sustain a trip at pre-Seaman’s Act determined passenger capacity without capsizing. Government regulation had effectively destroyed the Eastland’s career and cost over 800 people their lives.

The greatest irony of all in this story is that the very tragedy which inspired the regulations that doomed the Eastland had actually resulted from an earlier failure of government regulation itself. In an article published during the centenary observance of the RMS Titanic disaster, Dr. Chris Berg revealed that the Titanic’s owners had initially planned for the ship to carry more than enough lifeboats for everyone on board. However, after checking the government regulations, they found that only sixteen were required. So, believing the regulators had already provided a reasonable estimate to go by, they decided to cap the number at twenty: sixteen standards and four collapsible. In hindsight, if this regulation had not even existed, the Titanic would likely have had enough lifeboats for everyone, and over 1500 more souls would likely have survived that frigid April night in 1912.

The creation of a regulation which caused the deaths of thousands with the Titanic and the overcorrection with a regulation equally fatal to the Eastland is so classic an example of an age old story with government that it no longer comes as a surprise. These regulations were each made from unsound positions, the first as a generalization, the second resulting from an emotional response rather than logical foresight and the benefit of actual experience. In the end they had the same tragic result, something no one could have guessed that April morning in 1912: that an ocean liner which had already claimed 1500 victims would leave a legacy yet to claim the lives of another 800 souls.