On This Terrestrial Ball > Life > Lessons from Aloha 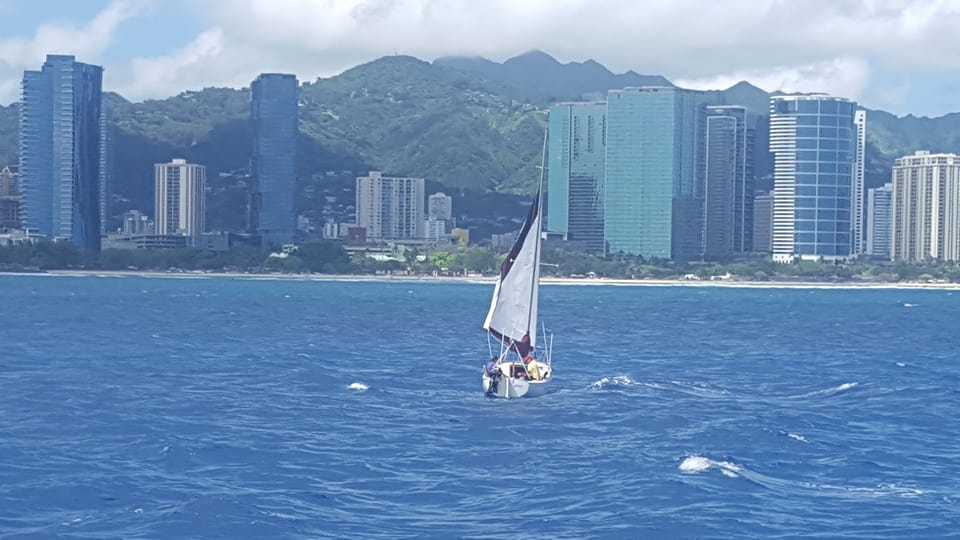 Hawaii has always held a special place in my heart. With free plane rides from a pilot grandfather, I grew up on trips to Honolulu, and later on I fell in love with movies like Lilo and Stitch and Moana. After an 18 year drought, I finally returned to Oahu with my family. A lot has changed since I was a child, but there is even more that has remained the same.

As an adult, I now understand why I love the islands so much – and why the islands and people seem to love me as well. Tourism was not the great industry it is today when my family started traveling to Hawaii. We did not go for the beaches, tropical weather, and piña coladas – although we enjoy it all – we went for the culture of the Hawaiian Islands. We love the land and the people. We sympathize with the natives who are resentful at the expensive development in Waikiki, making it hard to survive on a meager income. We share the rage of the inhabitants of the North Shore who do not want the industrialized city that the government is pushing.

Many people claim Hawaiians are racist against those from the mainland, especially white people. This has not been my experience (and statistics show that Hawaii is the least racist state in the U.S.), but I believe I understand where it comes from. The Hawaiians want to be left alone to run their islands as they like. In the spirit of Aloha, they are very welcoming to outsiders as long as those outsiders respect the culture and traditions of Hawaii. The Hawaiians loved my family and encouraged us to consider relocating there. They seemed relieved that we were not simply interested in an expensive vacation home! The natives do not want rich, white mainlanders moving to Oahu to change the culture and make it an even more expensive place to live. If you’re willing to experience what it is truly like to live as a local, Hawaii is one of the most hospitable places on earth.

If the American melting pot is in question, there is no doubt that a Hawaiian melting pot exist. The state has experiences many influxes of various immigrant groups, and their influence on Hawaiian culture is notable. Several modern symbols of Hawaii actually did not originate on the islands. Shave ice – the delicious, snow-soft, fresh fruit type, not the hard, artificial snow cones of the mainland – comes from Japan, though Hawaii has certainly added its own flair to it with its tropical flavors. Another icon from Japan – the Mmaneki-neko good luck cat – has been transformed with a lei into the aloha cat, displaying the best of both cultures. And the Hawaiian ukulele? You have Portuguese immigrants to thank for that.

Literally speaking, there is nothing – no person, animal, or plant – that can truly be said to be native to Hawaii. The islands were formed by volcanoes, after all. Everything that currently exists there had to be brought in. The people we call native Hawaiians were voyagers who traveled in canoes from various Polynesian islands that were sometimes thousands of miles away. Plants and animals traveled with humans and on their own. After the original Hawaiians settled, each new immigrant group brought new people, food, animals, and culture, forming the state into what it is today.

This rich history of exploration may partially account for the harmony amongst the different ethnic groups on the islands. The spirit of Aloha is welcome to all who are willing to embrace it. The Hawaiians knows their islands are gifts which they share with newcomers while they also learn from them in return. Hawaii is not perfect, but it is an excellent place to study and learn how vastly different people can get along.

If I had not grown up with a love for Hawaii, I likely would have dismissed it as another failing liberal state without much hope. But when I traveled to Hawaii last month with politics in my mind for the first time, I did not find a group of liberal or socialist natives who demanded destructive, big government policies. The Hawaiians are peaceful and want to be left alone to run their islands they way they see fit. If anything, they are resentful of the state and federal governments that are forcing them to adopt mainland ways, including expensive tourist condos and shops and industrialized cities.

If the current trend continues, Hawaii very well may end up as a series of tropical island getaways for rich liberals. Perhaps it will go the way of Venice, Italy and boast of a larger tourist than native population. It would be a shame if this happened, and the natives are doing their best to fight it. I believe many of them are misguided as to the correct solutions to their problems. Instead of minimum wage increases and socialized medicine, the people need more economic liberty and less regulation. However, I understand that their actions come from a good place. In fact, most people we disagree with politically have good intentions and just want the best for their communities.

Rich, intellectual debates about issues and principals are important, but we must not forget to first understand where those who disagree with are coming from. My trip to Hawaii reminded me that really are one ohana – one family, and if we listen to each other with compassion, we can take the best each side has to offer and create a better future together. No one has all the answers. If we want others to change their minds, we must be open to the possibility of changing ours. We will not ever agree on everything, but we can let go of our hatred and learn to get along by embracing our common values.

Hawaii has changed and evolved due to a tradition of hospitality and curiosity. Hateful arguments and rash characterizations do not win hearts and minds. Our first task is to listen to and understand one another. If I did ever move to the Aloha state, I would not become involved in politics until I learned the respect of the natives and had a firm grasp on how they see the world.

© 2017 Dani MacInnes & On This Terrestrial Ball. All rights reserved. This material may not be re-published, re-broadcast, re-written or re-distributed without permission from the author of this piece.